Jhirna zone is one of the six tourism zones of the most illustrious tiger reserve of India, Jim Corbett Reserve Park. Located on the southern edge of the Corbett reserve forest, the Jhirna zone is the home to a large variety of flora and fauna. Many years ago, this place was a village that later relocated to somewhere else and the land had been incorporated into the reserve park. The land then developed into the densely grown forest and large grassland which is home to animals like nilgai, sambhar, cheetal, and wild boar. These animals attract tigers to this area which makes this zone a favorite among tourists due to higher chances of seeing a tiger.

The large population of wild elephants and sloth bears also attracts wildlife enthusiasts in this zone. Along with wild animals, this zone has an amazing landscape with large grassland known as Chaur. The Chaur is usually a favorable place for herbivores like elephants and deer, which further invites predatory carnivores like a tiger. The zone has many river channels with warm stream beds and cliff edges make it an ideal spot for birding. There are various types of birds found in this place due to which it is the best zone for bird watchers. The best thing about the Jhirna zone is that it remains open all round the year for day safari if the weather is favorable.

Jhirna land was redeveloped and turned into an exotic lush green forest. Unlike other areas that are closed during the monsoon season (except Dhela region), the Jhirna region is visited by a large number of people throughout the year, as wildlife safaris are open throughout the year. 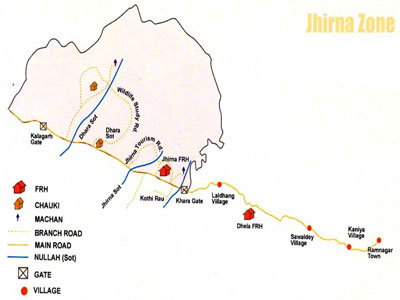 Situated on the southern edge of the Corbett National Park, the Jhirna tourist area offers some exclusive tiger and sloth bear sightings as well as a spectacular view of the landscape which is quite rich in wildlife. The topography of the Jhirna region is primarily a dry deciduous type and consists of a large grassland (chaur) known as Laldhang chaur. This bada chaur is a favorite destination for herbivores of the region like deer, chital, nilgai and elephants. Several water streams in this area nourish the wildlife of the region and add to the natural environment of the region. Also, this zone is considered a great place for bird watching.

To go inside the Jhirna zone, you need to obtain a safari permit from the forest authorities and also hire a safari vehicle and a naturist/guide. The entrance of Jhirna zone is Dhela Gate, which is about 15 km from Ramnagar, which is the nearest town which is also the railway station and bus stand from the zone. Safari for Jhirna zone is conducted throughout the year and maximum 30 jeeps in one shift in two shifts in a day. A maximum of 6 adults and 2 children (under 12 years of age) are allowed in a jeep. You can book your permit, a safari jeep, a guide for Jhirna Safari from our website.